The Bitten & Beholden eBook is on Sale!

If you haven't read my Children of Fenrir series yet, there is no better time to start than now. The ebook of the first novel in the series, Bitten & Beholden, is on sale for only .99 cents! If you have read it, it's a great time to buy it for a friend! The sale only lasts through Sunday, so grab it quick! And if you enjoy the read, I would be eternally grateful for a review on Amazon. BUY HERE. For more about it, read on below. 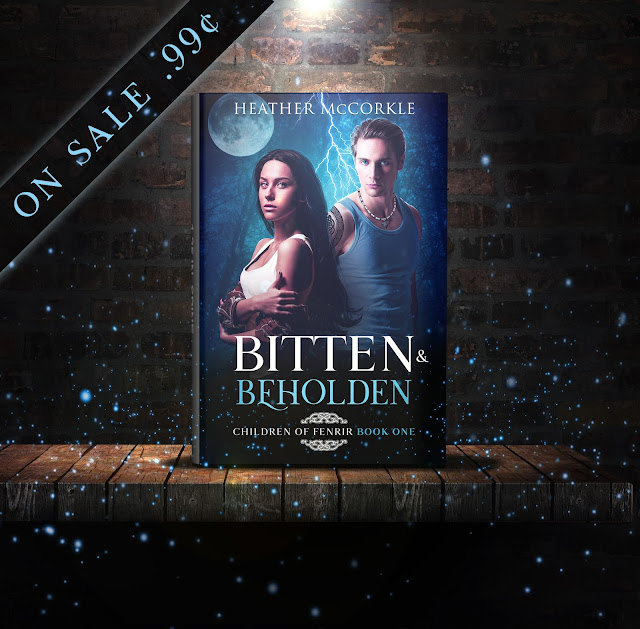 Sonya Michaelson has a problem of the howling kind. She wakes up to find her body going through wolfish changes and a telltale bite on her neck.

The man who bit her has disappeared, leaving behind a mysterious note to meet him in Montana. With her senses tipping into the freaky, she is left with no choice but to go after him.

Instead, she finds Tyler Viðarrson, an alluring man who claims he can teach her how to survive the transition…into a werewolf! But she’s not just any werewolf, she’s part of a lineage dating back to an ancient pack of Icelandic Vikings, who believe they’ve been touched by Loki.

And now the packs are fighting for her to join them.

If she doesn’t learn to handle her wolf by the full moon, she could lose what’s left of her sanity. But as she starts to get hot for teacher, she fears her sanity may be the least of her worries.

With an unknown rogue wolf changing people and an ancient power looming inside her, will she be able to get a grip on her bite, or will the wolf control her?
#ebook #paranormalromance #werewolves #HemlockHollow #werewolves #vikings #PNR #HalloweenReads #wolves