- March 15, 2012
Today for the Channeler's Choice tour I'm over at author Judith Graves' site, and author Christine Fonseca's site. I hope you'll stop by and say hi. Now on to the fun! 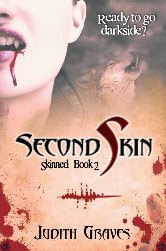 Judith: Thanks for hanging with me! Don’t forget to drop by my blog to read the answers Heather provided for my interview with HER.
blog tour Channeler's Choice great reads