I hope you'll help me in proving the traditional publishing industry wrong. Coming, this March, the book that Honor Before Heart, my historical romance was always meant to be, Honoring a Witch's Heart, now a historical fantasy about fae descendants living in America during the Civil War. And here is the cover reveal: 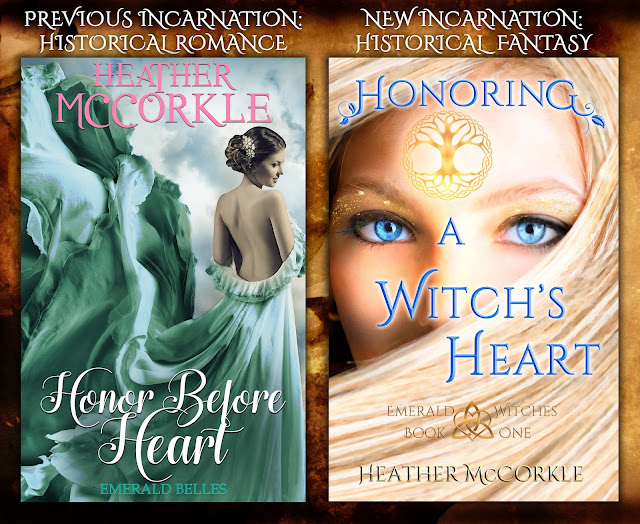 When I had the original idea for this novel, I talked to my agent about it. They said it sounded like it would be a tough sell due to the dual genres of fantasy and historical. It would be too hard to sell to a publisher, they said. They convinced me to write it is as just a historical romance instead, removing all fantasy elements from it. Though it broke my heart, I did it. And they were able to sign it to a publisher. Unfortunately, the series sold poorly. I hold no ill will toward my agent, they advised me in the way they thought was best, and they had good intentions.

After several years, I finally got my right back and I have rewritten it to the way I always intended it to be, historical fantasy. I'm hoping you'll help me prove the industry wrong by signing up for my review team, or grabbing a copy when it comes out for yourself or a friend.

The Fighting Irish of the 69th brigade hold honor and duty dear to their hearts, Corporal Sean MacBranain perhaps even more than most. But when a nurse impossibly, miraculously, perhaps even magically, saves his life and awakens his heart, even he may not be able to put honor before love.

When Union soldier Sean MacBranain awakens to a blond-haired, blue-eyed fae, he figures he must have died on the battlefield. But, as her magic fades along with his delirium, he realizes she is a field nurse serving his beloved 69th infantry.

Upon learning that the wounded corporal saved her hound—the last thing Ashlinn has left of her family—she becomes determined to save his life, despite the danger it presents of exposing her magic. His honorable ways and gentle manner capture a part of her that nothing has been able to since the disappearance of her last brother.

Reluctant to form attachments in the midst of a war where every battle comes with unimaginable casualties, they determine to remain only friends despite the affection growing within each of them. But as the war pushes and pulls them apart, they find their determination waning despite the heartache they know it may cause. Would he love her if he found out the truth? A letter found in the hound’s collar from not Sean, but Ashlinn’s missing brother, forces them to find out, and brings a danger not even all the guns of the south could muster.