- February 07, 2014
Happy book birthday to Flight For Safety by one of my very best friends, Karlene Petitt! Not for the faint of heart, this adult aviation thriller will literally leave you breathless. Written with the inside knowledge and depth of experience that only an airline pilot possesses, this book is unique in its accuracy and detail. But it's the exquisite writing and characters that will captivate you. 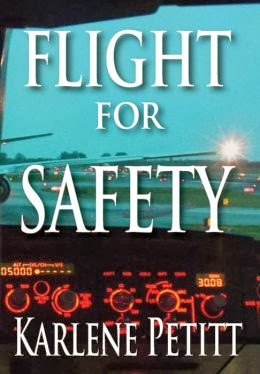 Global Air Lines merges with Coastal creating the largest airline in the world. In the fallout Captain Darby Bradshaw’s 4th stripes are ripped from her shoulders as she is bumped to first officer. Leaving her Boeing behind she is checked out on the Airbus A330. Compliments of sitting reserve she has not flown for nine-months.

But when Pacific Airlines Flight 574 is found in a watery grave, a Boeing 777 crashes short of a runway, and Global Air Lines implements a ‘train yourself at home’ program, Darby decides it’s time to take action before another crash occurs.

Darby tells the world, on her training blog, why the Pacific Airlines A330 crashed and all hell breaks loose.

Forced to pull the post she is called into the chief pilot’s office and her career threatened. But when her boyfriend, a Global check airman, disappears and numerous airline incidents are covered up, Darby realizes she has stepped into the heart of a far-reaching conspiracy, where each flight has turned into a game of Russian roulette.

Be sure to check it out, and remember, reviews and word of mouth are the greatest gift you can give an author if you like their work.