- October 10, 2013
The description alone of Hounded made it a must-read for me.  The fact that I'm working on reading as much adult fantasy as possible at the moment, made the timing perfect. That it was hitting the bestseller lists honestly didn't even come in to play. This is one of the first books I've bought based on just what I wanted to read (instead of a recommendation, a friend's book, or otherwise) in a while. 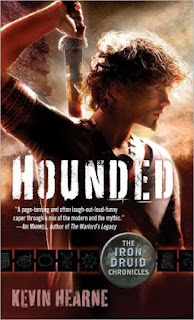 A handsome druid who runs a bookstore, hunts with his Irish wolfhound, and dodges the often unwanted attention of the Tuatha De Dannon, what's not to love? And for the most part I did love it. Atticus is a bit of a rogue when it comes to the ladies but he has a gentle way about him as well, even going to far as to help out the old Irish woman next door between fighting for his life and taking a roll in the hay with an Irish goddess.

There were bits that didn't work for me though. Especially in the beginning, there was a fair amount of info dump on Irish mythology. While it was all interesting,I would have liked it better if it had been slipped in along the way rather than dumped all at once. Overall though this was a great read packed with suspense, action, and fantastic humor.