Shadows of the Hidden Contest

- April 02, 2013
Today I'm helping a dear friend and fantastic author, Anne Riley, spread the word about a contest to win a copy of her paranormal YA novel, Shadows of the Hidden. The fun part, at different locations you'll get to read different excerpts! Be sure to click on the Rafflecopter at the end of the post to enter to win. Here is a bit about Shadows: 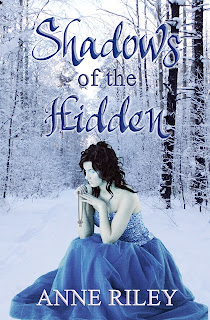 Natalie Watson doesn’t believe her parents are dead, even though they disappeared five years ago. Discovering the truth about their fate is one of the only things that get her out of bed in the morning. But after moving from her home in Georgia to her aunt’s boarding school in Maine, solving the mystery of her parents’ whereabouts is just one of several challenges she must face. When she’s not fending off attacks from the popular kids, she puzzles over the rumors about a strange boy in her math class–one with fiery red hair who rarely speaks.

Shadows of the Hidden:
Amazon / B&N

And now for the excerpt:

I’ve almost finished a row of stitches when the door bursts open and Michelle—my gum-smacking, Gucci-clad roommate—flounces in. An invisible cloud of J.Lo perfume thickens the air.
She stops short when she sees me, her blue eyes wide. “Whoa!”
I frown. “What? Did you forget about me or something?”
“No,” she says, striding across the room. She tosses her bag on the floor—an orange leather satchel that I’m sure cost as much as a small car—and snorts. “You’re just always asleep when I get home. You know, because you don’t have anything else to do.”
I look at the digital clock on my nightstand. It’s ten-thirty. She’s right—I’m normally in bed by nine.
“I’m surprised you’re in for the night,” I say, ignoring the jab about my lack of a social life. At this point—over a month into the school year—I’m pretty much a pro at brushing off Michelle’s constant deluge of snide comments.
“I’m just dropping off my bag. Ethan’s taking me out to the cliffs.” Her eyes linger on my half-finished scarf. “Why does that look familiar?”
“It’s the Gryffindor scarf. You’ve probably seen it in one of the Harry Potter mov—”
“Um, I know you’re not about to imply that I watch Harry Potter. I’m not twelve.”
I sigh. “As I’ve said before, Michelle, it’s not just twelve-year-olds that like—”
She throws up a hand, exasperated. “Please don’t try to defend it. I know you have a wand somewhere in this room, and I can’t even deal with it.”
My eyes flicker instinctively to my nightstand drawer, where I do, in fact, keep the wand I ordered online last year. Fourteen and a half inches, yew with a Phoenix feather core. Surprisingly swishy.

And now for the contest: