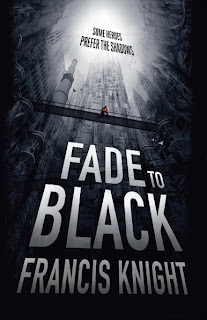 Heather: The concept of Fade To Black is fascinating! I love the idea of a city that builds up, instead of out. How did the idea for this novel come about?

Francis: Embarrassingly, it was originally a far future dystopia where I envisaged cities growing up due to lack of space. However my writers group (quite rightly!) shot down my future tech. So I changed it to fantasy, though I kept the idea of a lack of space forcing the city to grow upwards. I also have a great love for Bladerunner and that ilk of story, and I wanted to capture something of that atmosphere. How better than a dark and dismal towering city with copious amounts of rain?

Heather: How better indeed! The idea of drawing magic from pain is one I've never read of before, I love that! Can you tell us a bit more about pain-mages?

Francis: Well I was toying with the idea of costs to magic. I mean, if it’s all just “say a few words and POOF!, fireball”, everyone would be doing it, surely? So, what if it was a magic you really didn’t want to use unless you had to? So here we have our pain mages, which basically means they use pain to power their magic. Most of them use their own pain, but it has been known for a few of the nastier ones to use other people’s. There’s also the black, which is a major downside to using the magic – it’s like a drug, tempting the user to just give in to oblivion and never come back. Sometimes they don’t give in, but go a bit gaga resisting, which tends to end up in magical fisticuffs and/or portions of the city going up in smoke. One reason for that revolution a few years ago…and now pain mages are illegal. My main character, Rojan, persuades himself that he’s just being sensible not using his magic – I mean, why dislocate your own thumb to cast a spell when you don’t have to? Plus there’s less of a tendency to get arrested that way and in Mahala, being arrested generally means being messily dead sooner or later.

Heather: Sounds like a rough place! From your website it looks like this is going to be a trilogy. As one who is very excited about the first novel, I'm thrilled to see this! I wonder though, what do you have in the works for the future?

Francis: Oh, I’ve got a few things on the boil. Octopus magic, weaving fates and breaking fates, incompetent assassins and magical filing going hideously wrong…nothing is set in stone just yet though, so we shall see.

Heather: Octopus magic, I'm intrigued! Can you tell us what is your writing ritual like?

Francis: Things I need, tea. Copious amounts of tea. Preferably peace and quiet, though I can write with noise. I’ve been known to tell my Old Man to ‘Just go to the pub, dammit!’ so I can write in peace. He rarely complains. Other than that, I write whenever and wherever I can – and I find the act of writing is what inspires me. Things crop up as I write them, and then it’s like they’ve always been there.

Heather: LOL! Too awesome. And you sound like me when it comes to coffee. Thanks for joining us Francis. I'm really looking forward to reading your book. For my readers who want to join me, here are the links:

And you can find Francis at: