- November 12, 2013
It's time for a great book and a great giveaway! If you haven't heard of Crystal Collier's Moonless yet, then you are in for a treat. It is being described as Jane Eyre meets Supernatural and it seriously sounds that good! Today I'm excited to bring you an excerpt, and a giveaway from the author. 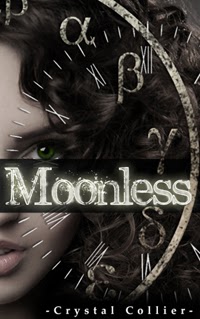 Unravel the mystery of the Moonless night! Hidden in each of the 8 blog tour excerpts is a single word. Gather all 8 and figure out the sentence to win a free copy of Moonless. Send your mystery sentence to crystal (AT) crystal-collier.com with the subject MYSTERY SENTENCE before December 10, 2013, and you will be entered to win one of 10 copies of MOONLESS—just in time for Christmas. Happy hunting!

Alexia lowered her eyelids to keep him from witnessing the forming tears.
Kiren stepped nearer, tucked a hand up under her jaw, and pressed his lips to her brow. Warmth radiated from the connection. She accepted it, trying to be grateful for the simple reassurance that—despite his reluctance toward romance—he did care for and would protect her, even from himself.
He sucked in a breath through his nose, and forced her chin upward. His lips crashed down over hers.
Shockwaves rolled through her, her knees going limp. His arm slipped around her back, pressing her to him. His fingers tugged through her hair. She surrendered entirely to the cataclysmic torrent tearing through her body.
The only things that existed were he, she, and the storm ripping through them. She clung to him. The only reality was this—this incredible connection. She wanted him, and nothing else. She wanted this, and nothing more. She wanted him, and he wanted her!
He pushed her back, holding her arms against her sides.
Panting.
Eyes closed.
She reached for him.
He grimaced, released her, and stepped into the shadows, vanishing.