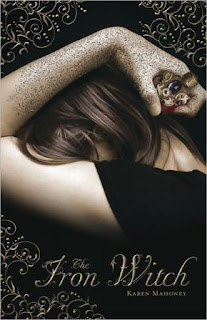 February's feature debut is Karen Mahoney, author of the young adult urban fantasy, The Iron Witch. First I'm dying to tell you a bit about this novel.

FREAK. That’s what her classmates call seventeen-year-old Donna Underwood. When she was seven, a horrific fey attack killed her father and drove her mother mad. Donna’s own nearly fatal injuries from the assault were fixed by magic—the iron tattoos branding her hands and arms. The child of alchemists, Donna feels cursed by the magical heritage that destroyed her parents and any chance she had for a normal life. The only thing that keeps her sane and grounded is her relationship with her best friend, Navin Sharma. 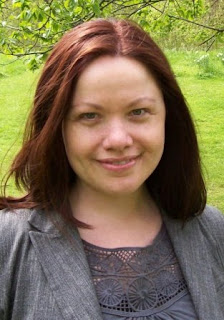 I'm very pleased to welcome Karen Mahoney to Heather's Odyssey. Karen I see from your web site that you've been published in a few pretty prestigious anthologies alongside some impressive authors. I'm curious, what drove you to move on to a novel, in particular one about the fey?
Karen: Thank you very much for inviting me!

It was actually the other way around – even though it doesn’t seem that way, considering that the short stories/anthologies came first in terms of publishing. It’s a long story, but the short version is that I met Trisha Telep (editor of The Eternal Kiss and Kiss Me Deadly) while she was working part time as the Romance buyer in an indie bookstore in London, and when she found out I’d just signed with my agent in New York (with The Iron Witch), she told me she had space in an anthology of YA vampire stories. Trisha gave me a huge break, and I’m so thankful to her for giving my writing a chance. Of course, she still had to LIKE whatever I sent her, but luckily for me she did! ;)

That is awesome! Trisha sounds amazing. Tell me, what was your favorite part of writing this novel?
Karen: The scenes between Donna and her best friend, Navin. They have such great chemistry and humour, those parts were a breeze – a lot of fun.

If they were fun for you to write then I can hardly wait to read them! Is there anything you can tell us about The Iron Witch that we may not know from your website?
Karen: Hmm… Good question. I could tell you that my teen vampire character, Moth (from the short stories), was originally a supporting player IN the novel. There was a whole subplot involving vampires, but during editorial revisions with my US publisher we actually took all of that out. The good thing about it, though, is that it ‘freed up’ Moth to star in her own novel – which I’ve now written and hope to sell one day. This is a great example of how difficult editorial decisions can end up benefitting you – if you give them a chance. I have no doubt that The Iron Witch is stronger for having the focus firmly on the alchemy and fey elements.

I hope you sell it too! I'd love to read Moth's story. I heard rumblings that we may be in for a sequel for The Iron Witch. Are you able to confirm that?
Karen: That is absolutely true! The Wood Queen should be out in early 2012. And we have just sold the third and final book, The Stone Demon, to Flux – which means that I get to tell my story as a trilogy, which is what I always wanted. I am very happy about this.

So am I! Whoo hoo! There is little I enjoy more than falling in love with characters and following them through a series. So what do you have in store for us after The Iron Witch series? (if you're able to answer)
Karen: I’m working on an adult urban fantasy novel, sort of on the side, but I have no idea if that will come to anything. Watch this space!

That would be great. I love all types of fantasy, adult or YA! I'm curious if there's anything in the publishing process that surprised you?
Karen: I think I knew a lot of what to expect because I blog with the Deadline Dames. I’ve learned a lot from the authors there – they’ve published dozens of books between them, and I was very lucky to be invited by Devon Monk. What an amazing source of information! We have a private Yahoo Group where we plot world domination… Um… I mean, where we talk about writing and publishing among ourselves. Heh.

Still, despite how well-prepared I felt, it’s pretty incredible how slooowly everything moves.

Ugh yes, the painfully slow crawl of publishing has to be tough! Any closing thoughts to leave us with?
Karen: Only to say that if there are any other aspiring authors reading this, hang in there and remember how slow things can be in publishing. Keep writing while you’re trying to find an agent, or while your book is out on submission to publishers, and build up a body of work that you can use later on. Don’t give up!

It's been a pleasure having you here Karen, thanks for joining us! I can hardly wait to see what you have in store for us next in the series. Hurry over here peeps to order The Iron Witch. And you can keep up with Karen's future endeavors here.
2011 Debuts good reads