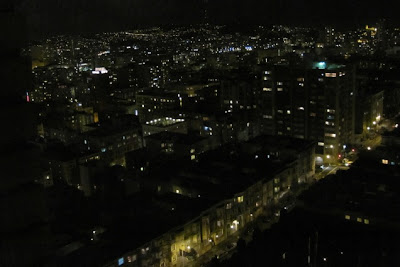 My muse last week was the San Francisco Writers Conference. It was all the good things I'd heard about it and so much more. ﻿This first picture is the view from my room at night. I'm not a city girl but it's hard not to be inspired by so much life and activity. My first impression of coming in to San Francisco is that these people are afraid of the dark. I've never seen so many lights, and no I haven't been to Vegas but I have been to Reno. ;)
The conference was big but the presenters (agents, editors, and authors) made themselves very accessible the entire time. There was a wonderful cocktail party where I had the chance to chat with agents Laurie McClean, Donald Maass, Jill Marsal and more. I was delighted to meet and hang out with my Twitter buddy Carol Valdez who in turn introduced me to Shannon Messenger. The two of them took great care of me during the conference and were sweet as could be. I also had the chance to meet agent Vickie Motter who's blog I am a huge fan of, not to mention she is kind as could be. Guess what, even better in person!
There was the Ask A Pro session where we had the chance to either pitch to an editor or ask them a question. I sat at the table of Annette Pollert, editor of Simon Pulse and had the chance to not only pitch to her, but to absorb all the wonderful information she was so gracious to dish out to us all. Agent Speed Dating was NOT the nightmare I imagined it to be. Seriously, it wasn't! We were all let into a big room and told to line up in front of the agents we wanted to pitch to and to choose carefully in case there wasn't enough time. There was plenty of time though and there was little to no pressure. I pitched to Laurie McClean, who I have been a bit of a fangirl of for years and just now felt I had something good enough to send to, Ilse Craane of Bookstop Literary, and the fabulous Vickie Motter of Andrea Hurst Literary. I'm beyond thrilled to say there were requests all around.
agents conferences editors