- June 05, 2013
Today I'm excited to be celebrating the release of Dragonfly by my friend, and fabulous author, Leigh T. Moore! Advanced praise is already coming in on it. 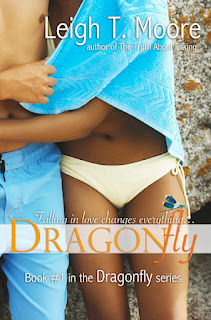 "Dragonfly swept me off my feet! Once I started reading this book it kinda sucked me into the story and I had a hard time putting it down." --Stephanie, My Thoughts... reviews

Five Stars! "Angst, longing, jealousy, mystery, secrets, love triangles, sexy scenes! Could you even ask for more? Well you can because it is also very well-written and fast-paced. Great book to dive into poolside, but I will warn you may get so swept up in it you may end up with some sun burn. So I STRONGLY suggest you invest in some sunscreen as well as a copy of Dragonfly." --Nichole, Goodreads reviewer

"I truly enjoyed this one! I thought the characters were intriguing, the mystery and story were interesting and definitely have ME WANTING MORE!!!!!!!" --Mandy, The Romance Bookie

Anna Sanders expected an anonymous (and uneventful) senior year until she crossed paths with rich-and-sexy Jack Kyser and his twin sister Lucy. Pulling Anna into their extravagant lifestyle on the Gulf Coast, Lucy pushed Anna outside her comfort zone, and Jack showed her feelings she’d never experienced... Until he mysteriously withdrew. Anna turned to her internship at the city paper and to her old attraction for Julian, a handsome local artist and rising star, for distraction. But both led to her discovery of a decades-old secret closely guarded by the twins’ distant, single father. A secret that could permanently change all their lives.

Be watching for Undertow, Book 2 in the Dragonfly series, coming July 18!

Falling in Love Changes Everything…

“C’mon,” Julian said, helping me stand. “Let’s blow off this party and catch a movie or go to Scoops. This isn’t our scene.” I shook my head. “I just really want to go home.” The tears were trying to start again. “Can I just go home now?” “Sure,” he said, holding my cheek. I took a limping step, and he stopped. “Does it hurt to walk?” My leg was throbbing. I nodded, looking down, and before I realized what was happening, he was lifting me in his arms. “Julian, wait,” I held his shoulders. “I’m too heavy!” “It’s okay,” he said, walking on. I sighed and leaned my head against his shoulder. I didn’t feel like fighting. Gentle pressure against my temple, and he’d kissed me. “You’ll get over this,” I heard him say under his breath.

She is an award-winning journalist and editor, who has also worked in marketing and public relations for many years. Her writing has appeared in newspapers and magazines across the southeast and Midwest U.S., and she runs the popular writing-craft blog That’s Write.

A southern ex-pat and beach bum, she currently lives with her husband, two young children, and one grumpy cat in the Midwest.

Read excerpts of her books on Wattpad and Figment!

* * *
Enter at this link to #WIN a Kindle Touch loaded with all FOUR of Leigh's books AND an exclusive eARC of Undertow; A signed, print set of Dragonfly and Undertow, or ebook sets of both!