- December 30, 2013
The excitement and buzz drew me to this novel but the story and the writing is what kept me with it. You may have heard of it, if not, I have a feeling you will very soon. This is one that is destined for big things. 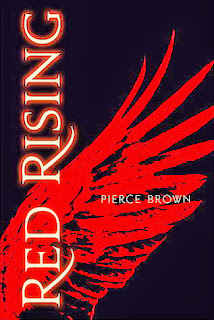 From the first page I knew I would love it. The characters are rich and three dimensional and the world is so well developed you feel as though you're there. The perfect balance of description, action, and dialogue make for an excellent book. For the first one hundred pages I was held enrapt, swept away by the mystery and hardships of life on Mars.

Then the story shifted to an academy of sorts where the students played at ancient, primitive war games that felt more like I had gone back to eleventh century Earth. Which would have been fine if that's the type of book I wanted to read, but I was deep into~and excited about~a sci-fi novel, not a military historical. There were still bits of sci-fi sprinkled in with the overseers of the school interacting now and then, but they were few and far between. It ramped back up to sci-fi at the end of the novel, but never quite returning to the level it started at.

That said, the writing was spectacular, character development every author dreams of, the world building was great with richly developed social classes and government, and the descriptions of Mars were transportative~though once it moved to the school it simply felt like Earth. I'm looking forward to the sequel though, because I know it is headed in a very interesting direction.