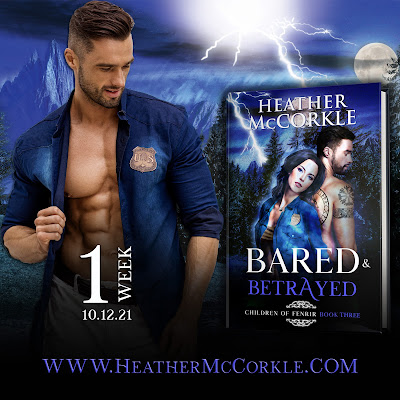 I can hardly beleive Bared & Betrayed releases in only one week! Time is absolutely flying by! Hang on, let me grab a paper bag to hyperventilate into. One might think after releasing ten books out into the world already, this would get easier. Nope. Not even a little. I am as nervous as ever, hoping people will like it, that it will speak to them in some way, or at the very least entertain them and they will recommend it to everyone they know, and don't know.

To celebrate I'm taking part in #MonsterMash (see the post below this one), celebrating with my friends this weekend, doing giveaways on social media (keep an eye out all next week on my Twitter and Instagram account for pop up ebook giveaways!), and a special giveaway to my newsletter subscribers next week as well.

So what is Bared & Betrayed all about?

It is the all new novel in my Children of Fenrir series, the one that brings the three altogether and sets the stage for something special which I will announce later. It is about a kick-ass detective turned werewolf who is on the hunt for not only the one who attacked, and the fiercely loyal and horribly misunderstood forestry officer she is forced to partner up with.

I hope you'll join me for all the fun, shenanigans, and giveaways next week. Remember to subscribe to my newsletter for a special giveaway! You can pre-order Bared & Betrayed at THIS LINK!

Here is more about it:

In the name of protecting his family and his kind, Raul Anderson has made some terrible decisions, and even worse mistakes. Mistakes that got him bumped from First Verndari, to the bottom of the pack. Being blackmailed is no excuse, especially when he can't prove it. Now he has to work his way back up to the top of the pack so he can challenge the werewolf he suspects is plotting to throw them into a war with humans.

Elexis Sandalius will do whatever it takes to catch the werewolf that attacked and changed her—even accept a job as a detective in a town full of werewolves, and partner with a guy who bit another woman in without her permission. She couldn't dislike the sexy, cocky ex-quarterback anymore if he had been the one to bite her. Until it becomes clear he is not what he appears to be, and is certainly not what everyone thinks he is.

If they can’t overcome their dislike of one another—and deal with their growing attraction—a mass murderer will not only walk but will launch their kind into war.