Today I'm celebrating the release of Genesis with author Kristie Cook. This novella is a companion to Kristie's popular paranormal novels, Promise and Purpose. Here is a bit about Genesis: 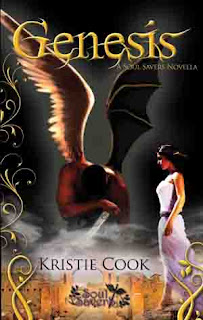 A father who reveals his truth.
Twins who take different paths—one light, one dark.
Angels who have plans for them both
And Demons who do as well.
So the Earthly battle for souls ignites…

A tale that is over 2,000 years old, this is the story of the Amadis beginnings.

Please welcome Kristie to tell us a bit more about Genesis:

Kristie: It’s a bit different from the other Soul Savers books. Although the fantasy world I created is the same, the real world is not. After all, it takes place over 2,000 years ago, around 200 B.C. So it required a lot of research to understand life in Greece during that era. For each stop along the release tour, I’m sharing something I learned and how it ties into the story.

Today we explore marriage customs. Most wedding ceremonies took place in January and began after dark. The bride was carried to the groom’s home with a procession of family and friends carrying torches and playing music. The bride would eat a piece of fruit from the groom, symbolizing that the man would now provide food and basic needs for her.

Fathers arranged marriages for their daughters, who married at about age 15 to men who were 30 or older. Can you imagine?! Ew! Divorce was allowed and common. I wonder why…

In Genesis, marriage is more about the commitment and lifestyle of the man and woman. The main characters don’t participate in ceremonies, but they do know life as husband and wife. There’s a reason for this, but I won’t give it away. I can tell you, though, that the wives were not betrothed, nor were they teens. In fact, the only character raised in the traditional Greek society has something to say about this.


Thank you, Heather, for being a stop along the tour. You’re a most gracious hostess! Lovely readers, you can be entered to win a Soul Savers swag pack simply by commenting below. Your comments also gain you entries to win the Grand Prize at the end of the tour. For more details about the tour, stop schedule and the Grand Prize, visit the tour page.

You're very welcome Kristie, thank you for stopping by! Before you learn more about the tour, here is a bit of background on this fabulous author:

Besides writing, she enjoys reading, cooking, traveling and riding on the back of a motorcycle. She has lived in ten states, but currently calls Southwest Florida home with her husband, three teenage sons, a beagle and a puggle. She can be found at: