Cover Reveal for Honor Among Orcs by Amalia Dillin

- February 20, 2014
I'm excited to be participating in the cover reveal for a great author friend of mine, Amalia Dillin. The design is by Melissa Stevens. Don't miss the fantastic giveaway at the end of the post! Without further ado, here it is:

Honor Among Orcs
by Amalia Dillin 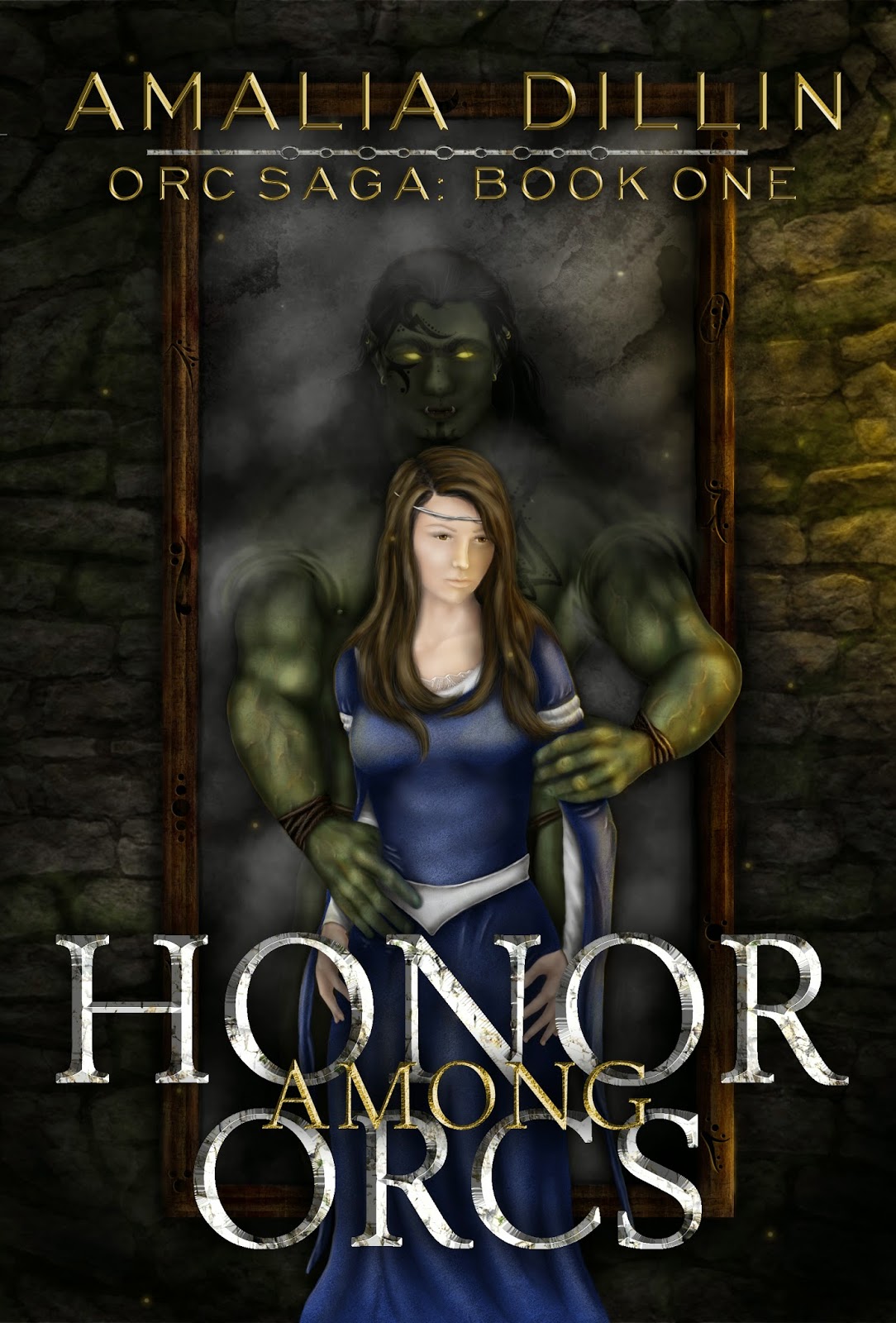 After nearly a decade as the king’s whipping-girl, Princess Arianna has no intention of going quietly into marriage to some treasonous noble, or serving obediently as the king’s spy until her death is more convenient. When she discovers a handsome orc, chained and trapped inside a magic mirror, Arianna cannot help but see a lasting freedom from her father's abuse.

Left to rot inside a mirror by the king, Bolthorn never imagined his prayers would be answered by a princess. Nor did he ever expect to meet so worthy a woman after knowing her father’s cruelty. He needs her help to escape the mirror before the king marches against the orcs, but all he can offer Arianna is ice and darkness in exchange for her aid.

If Arianna can free the monster behind the glass, perhaps she might free herself, as well. But once they cross the mountain, there will be no return, and the deadly winter is the least of what threatens them on the other side. Romance blossoms in this gripping fantasy adventure.


He knew these woods, sparse as they had become, and when they broke, he knew the tundra of the foothills too. Just before dawn, he found the outcrop beneath which he had made a shelter his first night beyond the mountains, and though he did not dare to light a fire, the sedge made a soft bed.

After a meal of apples and cheese, the last of their food, Arianna curled against his side, sharing the fur, and rested her head on his shoulder. He tested her forehead for fever and breathed his relief when she did not burn against his palm.

She tugged his hand away, a small smile curving her lips. “You worry overmuch. There are still two days of warmth before I must fight your cruel winds. I will be well enough for your mountains by then.”

His fingers lingered against her skin and her smile faded. He traced the clan-markings on her cheek and her lips parted, her heart thrumming in his ears.

Up the bridge of her nose and over her eyebrow, the umber flaked from her skin, coloring his fingertip. Down along the line of her jaw, to the pulse point beneath. Her breathing hitched. He only wished the marks had reached her collarbone, to give him some excuse to trail his fingers across the smooth skin there.

“You make a beautiful orc.”

“Not a Vala?” she asked, her eyelashes sweeping across her cheek.

“The Vala cannot marry.” The sunlight caught in her hair, flashing reds within the rich brown and he smoothed the soft, wild strands from her face. “They cannot bear children, or know the touch of any kind of man after they have made their vows. They know only the ancestors and the mysteries they reveal.”

Oh. It was the first thing she had ever said to him, trembling against the stone. She trembled now, too. As she should, he thought, knowing herself within the arms of an orc. He closed his eyes and drew his hand back. This was a dangerous game to play with her so near, so vulnerable.

“Sleep well, princess,” he said, his jaw tight against his need. “You’ll want your strength.”

She made a noise in the back of her throat, but when he glanced at her, she had turned away.

Amalia Dillin began as a Biology major before taking Latin and falling in love with old heroes and older gods. After that, she couldn't stop writing about them, with the occasional break for more contemporary subjects. She lives in upstate New York with her husband, and dreams of the day when she will own goats--to pull her chariot through the sky, of course.

Amalia is the author of the Fate of the Gods trilogy from World Weaver Press, and the soon to be released Orc Saga, coming April 1, 2014. You can learn more about her work at www.amaliadillin.com