Soul Mates and Twin Flames in The Space Between

Today I'm excited to welcome one of my favorite authors, Kristie Cook, over to celebrate the release of her new adult paranormal novel, The Space Between. This book blew me away. You're going to love it! And, you're going to love Kristie. She's offering a $5 Amazon or B&N gift card to one person who reads this post and tells Kristie she dropped by my blog! To enter all you have to do is click on one of the options below on the Rafflecopter. And, Kristie is doing a MAJOR giveaway on her own site of a $200 gift card so be sure to drop by her site after you've read this and entered here. I hope you'll join me in welcoming Kristie.

Kristie: Thank you, Heather, so much for participating in the release tour of The Space Between! And thank you, too, for being a beta reader! You asked me about my unique take on soul mates in this book and how I came up with it. I always giggle when people ask me about inspiration for my ideas, because the answer’s never easy. My ideas are usually the result of several things coming together. That’s what happened here.

It started with the desire to make this new series, The Book of Phoenix, as different as possible from my first series, the Soul Savers. They both deal with souls and the ultimate connection between them, but, besides battles between good and evil, the similarities end there. In Soul Savers, the two main characters are soul mates—two souls that were created for each other. In the Book of Phoenix, I wanted a connection that was just as significant, but different.

And I didn’t want to contradict myself either. I didn’t want to diminish the connection between Alexis and Tristan in the Soul Savers with this other series. So as writers do, I researched ideas for a similar connection between souls, and I discovered the concept of Twin Flames or twin souls—one soul that has been split in half. The idea goes back to Plato and more recently became part of the New Age Movement, started in part by Edgar Cayce.

As I always do, however, I wanted to put my own spin on the idea. I also didn’t want to contradict my spiritual beliefs. Although it’s fiction, this remains important to me, so that was taken into account as I created my mythology.

I already had some pieces in place before finding the idea of Twin Flames, but it fit in perfectly. So perfectly that I knew nothing else would work. I’d toyed with the idea of using only the “twin” part, researching twins and Gemini, but I didn’t want readers to get the idea that the love interests were actually twins. Ew! Then I noticed how much fire was already playing a major theme in my characters and the plot. Keeping “Flames” in the term was only natural.

So the relationships between my characters in The Space Between are based on souls that have been split and each piece is constantly searching for its other half. But in my world, once they find each other, life gets a little…weird. And if they don’t find each other? It’s not good. At all.

There’s so much more I could say about this idea and my spin on Twin Flames and soul mates, but I don’t want to give anything away. If it’s okay to say so myself, I think the concept in the book is really cool. I hope you’ll check out The Space Between to see what I mean.

About The Space Between, Part One of The Book of Phoenix: 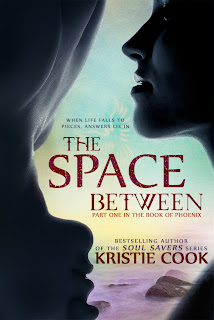 Bestselling author Kristie Cook, with over 200,000 books sold, brings you another New Adult paranormal series, The Book of Phoenix

“A completely unique story with a paranormal twist . . . the perfect blend of romance and mystery with a phenomenal plot that will keep you guessing.” ~ Jessica, Confessions of a Bookaholic

“I loved this book! The characters, the romance, the plot, the originality! It had everything to make it an amazing book!” ~ Kendall, Book Crazy

After a month-long dance tour through Italy, 20-year-old Leni Drago returns to Georgia to care for her great-uncle, only to find him gone, the home they shared empty and any evidence he ever existed wiped out. All that’s left is a journal she can’t open.

Jeric Winters has been searching for a piece of his past for over a year, only to reach a dead-end in Georgia. When an urgent and magnetic pull draws him out of his hotel room, he comes face-to-face with the beautiful dancer who’s been haunting his dreams day and night.

Jeric’s one to stay away from—a bad-boy, hit-it-and-quit-it type—but Leni can’t escape the fervent feelings between them. As their own existences begin to crumble around them and shadowy forms that are more monsters than men attack, they realize there’s more to the connection between them than physical fascination.

To solve the riddle their lives have become, they must embark on a journey that requires them to face their pasts and release their true souls. And they must do it fast—dark ones from another world are closing in, intent on killing them. Permanently.

“This is a completely new twist on the idea of a timeless love story with a paranormal twist unlike any other. The connection between the two characters is bone deep and resonates beautifully. I will never forget this novel.” ~ Heather McCorkle, Author of the fantasy Channeler series

“Kristie has done it again! Her Soul Savers series is my favorite by far and yet The Space Between is easily the best book she’s ever written! It's dangerous, suspenseful, and smokin’ hot.” ~ Marissa, Comfortably Read Book Reviews

“The Space Between is an amazing story of life, love and fates. Author Kristie Cook has you hanging on the edge of every page. This book stays in your head well after the last page.” ~ Mindy, Forbidden Reviews

Enter to win a $5 Gift Certificate to either Amazon or B&N!

**Mature Content** Recommended for ages 17+ due to sexual situations and language. 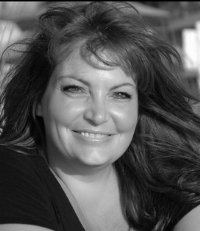 Kristie Cook is a lifelong, award-winning writer in various genres, from marketing communications to fantasy fiction. She continues to write the Soul Savers Series, a New Adult paranormal romance/contemporary fantasy, with the first four books, Promise, Purpose, Devotion and Power available now and the next book coming in June 2013. She’s also written a companion novella, Genesis: A Soul Savers Novella, currently available. Over 200,000 Soul Savers books have been sold, with Promise peaking at #54 on the Amazon Top 100 Paid list and at #1 in the Amazon Fantasy category.
The Space Between kicks off her second New Adult paranormal series, The Book of Phoenix.
Besides writing, Kristie enjoys reading, cooking, traveling and riding on the back of a motorcycle. She has lived in ten states, but currently calls Southwest Florida home with her husband, three teenage sons, a beagle and a puggle. She can be found at: