- April 17, 2013
Today I'm thrilled to be welcoming my friend and fantasy author, Amalia Dillin over for an interview. Amalia's debut novel, Forged By Fate, just released!

Heather: Welcome to my place Amalia! Forged by Fate has been described as "an artful blend of myth and legend" yet it deals with the biblical Adam and Eve. What inspired you to blend the two different elements together? 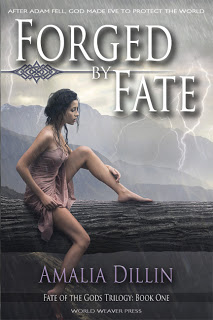 Amalia: Well, Myth and Legend, I don't think, are that different -- they're already blended in things like The Iliad and the Odyssey, where we see this mix of gods and men and history. Sometimes it's hard to tell where Legend leaves off and Myth begins. I think this is very much the case in the Bible, as well. The Creation story in Genesis is a myth, the story of Adam and Eve, or Noah and the flood, or Moses, those might be legends, or maybe they're myths too. It's hard to say! If a Myth is defined as something which explains how or why some natural phenomena, and legend is defined as the explanation of something more historical, or grounded in history, I'd guess that MOST foundation stories of MOST religions are both! After all, you can't very well have a world in which OTHER gods are walking around in abundance and variety and at the same time, claim that Christianity, God, the Archangels, Lucifer, and Adam and Eve can't exist!

Heather: Interesting theory, I like it! Can you tell us a bit more about your Adam and Eve and how they differ from the biblical couple?

Amalia: For starters, in Forged by Fate, Adam is kind of a villain. So often, we see Eve cast in this role of ... betrayer. In the Bible, she's seduced by the serpent, and then, knowing full well what she's about, tricks Adam into eating the fruit along with her. But what if she had a reason for eating the fruit beyond "the serpent says so?" What if it was the only way forward that might preserve Creation? What if Eve DID know exactly what she was doing, and it was self-sacrifice, rather than sin? And let's not forget that there are two stories of Creation in the Bible, also -- and in the FIRST, Adam and Eve are made together, as equals, AFTER the rest of Creation had been assembled by God. What does that mean, and why is it so often overlooked in our collective eagerness to place blame in the fall of man? I think these are kind of important questions, and I wanted to explore the answers. I wanted to see what the world might have looked like through Eve's eyes.


The other big important distinction, is that my Adam and Eve are not quite mortal, or human. They're something more, caught in an endless loop of life and death, repeating every 100 years, give or take. So while everyone else around them dies, they're reborn again, and live on, generation after generation.

Heather: To see the world through Eve's eyes, I love that. What do you have in the works for the future?

Amalia: I'm really excited to say that I have a novella coming, titled TEMPTING FATE, set in the Fate of the Gods series world, and after that, book two, A FATE FORGOTTEN! Followed by book three, of course, which I'm in the process of revising! There's a lot of story left for Adam, Eve, and Thor, as well as Athena and Ra, and a few other characters we haven't met yet.

Heather: Wow, Athena and Ra as well? You really mix it up, how exciting! Can you tell us a bit about your writing ritual (if you write by hand, on the computer, if you need something with you, music, etc.)?

Amalia: I don't have much in the way of ritual -- I write on my laptop, and I use Word, because it doesn't have so many distractions as other programs like Scrivener, and because I'm kind of a Pantser, I find that those extra bells and whistles don't really do me that much good, outside of just allowing me to procrastinate endlessly! Sometimes I listen to music, sometimes I don't. Most of the time I have a glass of water at hand, but that's about it!

Heather: Dedicated, I love that! Thanks for dropping by Amalia! Readers, if you're interested in learning more about FATE OF THE GODS series, and the first book, FORGED BY FATE, check out Amalia's website, or World Weaver Press! And you can also buy the book now, in print and ebook from Amazon, and ebook from Barnes and Noble, as well as for Kobo!
Amalia Dillin Featured Author