- April 24, 2013
Today I'm pleased to welcome fantasy author Amy Raby over for an interview. Amy's debut novel, Assassin's Gambit released from Signet books this month! Isn't that cover just beautiful?! No, I didn't design it, but I wish I had! Welcome to my place Amy, it's a pleasure to have you with us.

Heather: Assassin's Gambit sounds like a delicious, multi-layered novel. How did the idea for it come about? 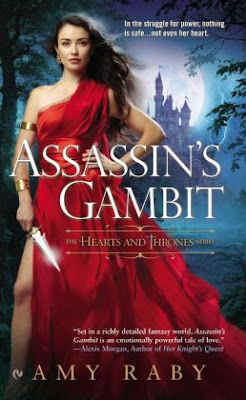 Amy: Thank you! I had written another book in which Lucien (the hero of Gambit) appeared as a supporting character. Lucien was disabled, obsessed with battlefield and Caturanga strategy, and wicked smart. He stole every scene he was in, and I knew I had to write a book featuring him.

The only trouble was pairing him with a suitable heroine. She had to be a strong character, or he would overshadow her. I figured she should be a Caturanga player, like him, since they could bond over that. Then I came up with the idea of making her an assassin sent to seduce and kill him, and I was off to the races.

Heather: Wow! Now I'm dying to see how their chemistry develops. The war-like game of Caturanga sounds fascinating. Can you tell us a bit about it without giving any spoilers away?

Amy: It's essentially a fantasy version of chess, with multiple boards and some different game dynamics, such as the strategy of gaining the influence of each of the three moons, and the use of terrain obstacles to inhibit the opponent's movement. Its significance for Lucien is that since his disability, he's been unable to take to the battlefield in real life, so Caturanga serves as a substitute. For Vitala, Caturanga is a means of gaining access to Lucien.

Heather: I love that, it sounds like a game I'd enjoy. From your website, I see that there is going to be a second book, Spy's Honor. What do you have in the works after that?

Amy: Yes, Spy's Honor comes out in October. It goes back in time a little and tells the story of Lucien's cousin Rhianne, who falls in love with an enemy spy and gets into some serious trouble. The third book in the series takes place several years after Gambit and features Lucien's younger sister Celeste. Vitala and Lucien are also minor players in that novel, dealing with some of the political fallout from the events of Gambit.

Heather: Sounds like they can all be read separate, I love that! Can you tell us what your writing ritual is like?

Amy: I draft relatively quickly, at a rate of 1000 words per day, and then I start revising, which takes a lot longer. I revise heavily and often end up rewriting almost the entire manuscript, maybe more than once. As far as my writing environment, I have kids so I just take what I can get. I'd love a distraction-free environment, but in my house that doesn't happen. So I've learned to write in the presence of distractions.

Thanks for joining us Amy, it was a pleasure! Can you tell my friends where to find you?