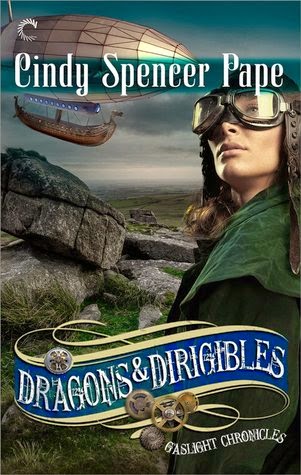 This book started out strong and very interesting. It's an alternate Europe that mixes supernatural and steampunk, which is part of what drew me because I love it when the two are mixed. Don't be deceived by the title though, dragons aren't gallivanting through England. I don't want to give away too much there, but let's just say they are more of a metaphor than a physical thing, so this novella in the series isn't as heavy on the fantasy as it sounds. I found myself cheering for Melody and warming up to Victor despite some of his old-fashioned (then in fashion) ways and beliefs.

I knew this was a novella getting into it and that didn't bother me. But, I found that I liked the characters and the story so much so that I wanted more of it, and not just more of the series, but more of this novel. With a few things fleshed out fully this would have been outstanding. As it was, it was a good, quick read that felt a bit rushed in places. I would recommend it for fans of romantic steampunk. I give it 3.5 for great characters and an interesting world.