Frailties of the Bond Book Blitz

- March 21, 2013
My good friend, and fabulous author, Angela Brown has just released her latest novel, Frailties of the Bond and I'm taking part in the book blitz that is celebrating the rest of the month. You'll be seeing Angela and her book all over the blogosphere, along with many different chances to win prizes. In fact, one lucky commentor on this blog, will win an eBook copy of Frailties of the Bond! If you love fresh, unique paranormal then you don't want to miss this.

Before we get to the giveaway though, Angela has dropped by to share a few 'fives' with us.

Hi Angela, welcome to my blog! So tell us, what are the last five books you've read?

I made the list! *happy dance*. Now as a movie buff, I'm dying to know what your top five favorite movies are.

I LOVE The Matrix and CTHD, the others I'm adding to my to-watch list! Thanks for dropping by, as always, it's a pleasure having you over. Angela was kind enough to give us a blurb from Frailties of the Bond that I get to share with you. After you've read the blurb, don't forget to leave a comment with your email address so you can be entered to win an eBook copy!

Blurb:
Luca veered into the woods for his normal scenic route home. Broad tree trunks stood tall, a legion of nature’s soldiers deeply rooted and strong. He closed his eyes briefly, skin tingling. He sensed another presence. He’d felt it before, but it felt almost tangible this night.
The setting sun crept from its throne in the sky leaving a trail of golden fingers splayed out over the familiar cliff side in the distance. For a moment, Luca smelled the scent of apricots. His heart skipped a beat. His mind wandered back to the red letter…then further back to that fateful day.
A twig snapped nearby. His ears perked and he paused mid step. Glancing around, he spotted a raccoon shaking itself free of a small heap of fallen leaves. He let go of a breath he hadn’t realized he held. Whoa, maybe I’m thinking about Vivie a little too much.
He turned his mind to other things, like the trouble he’d face when he got home. He forgot to call his mom and tell her he was going to the gym. No telling how pissed she was.
Arriving home, he took the steps two at a time, focused on digging his keys from inside his bag. He reached one hand out, grasping for the door knob.
Instead, nothing but air.
He finally looked up, startled at the sight before him. The door didn’t stand ajar or slightly open.
It. Was. Gone. 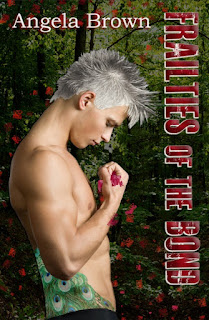 NEO – Network of Extraordinaires and Otherworldlies:

Those who answer the call from NEO play their part in maintaining balance in our ever-changing times. With power-hungry malcontents, jealous gods, and even those with misguided good intentions, the fate of our world has oft been held in the hands of unsung heroes such as those that are members of NEO.

But before NEO, these heroes and heroines had lives, loves, issues and interests that didn’t involve saving mankind.

In Frailties of the Bond, it only takes one bite to change a life…
After a hiking trip gone wrong, sixteen-year-old Luca should have been dead. Since then, he’s drifted from one school day to the next, annoyed by the looks of suspicion. When a vampire attack claimed his mother and forced his first shift into animal form, Luca set out for Texas, vengeance bound, only to discover so much more when Aimee crossed his path.

Flesh-born of vampire parents sixteen years ago, Aimee shouldn’t exist. Magic, though, made dreams come true for an undead couple desperate for a child all their own. But this magic came with a price, a cost Aimee discovered after one forbidden bite.

You can find Frailties of the Bond at:
Amazon US, Kobo, B&N

You can find Angela at: