- July 17, 2013
I'm a bit ashamed to say that I had no idea who Susan Krinard was, so when I chose this the fact that it boasted she was a NYT Bestseller bore no weight with me. I chose it because of this bit of description toward the end of its synopsis online: 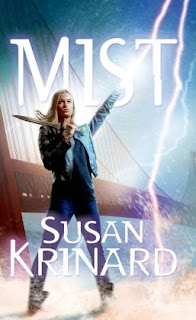 Mist’s normal world is falling apart. But thankfully, Mist isn’t quite so normal herself. She’s a Valkyrie, and she’s going to need all her skill to thwart Loki’s schemes and save modern Earth from the ravages of a battle of the gods.

A Valkyrie in modern day San Francisco, how could I resist? And I'm glad I didn't because there was a lot to love about this book. It started out several hundred years before, which though I loved this part, the book could have done without. It bore no weight on the rest of the story. I kept waiting for it to but it just didn't.

There is a lot of Norse mythology woven throughout (and admittedly sometimes 'info dumped') and as a fan of Norse mythology, I really enjoyed that part. Many of the references were very clever and helped to enrich the atmosphere of the book.

It starts off with great action and pretty much keeps up that pace throughout. Dainn's character was my favorite, though he certainly didn't start that way. I disliked him but he grew on me as his motives were revealed and he developed. I would have liked to have seen Mist's own development be as organic as his. As it was, it felt as though we just scratched the surface with her. The ending left a bit to be desired, and not because it left it open ended for a sequel, that I don't mind. Without giving away too much, it felt a bit rushed. Overall I enjoyed this and I would read another book by this author involving these characters.
book review Mist Susan Krinard Valkyrie