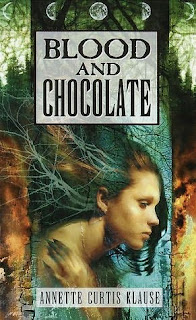 This week is banned books week, a time when readers and writers celebrate and support the books that have been banned. There is a list at this link of books that are currently banned but it is by no means all inclusive. Books are banned for a number of different reasons at a number of different places. You might be surprised and appalled by the reasons. There are books that are banned simply because they involve paranormal elements. The Harry Potter books are banned. Really. What does banned mean? Some stores, libraries, and schools won't carry the books. On the flip side of the coin, many libraries and stores fight to keep books from being banned.

Today I'm featuring a book that isn't on this banned list but it is banned from many schools and some libraries. It is Blood And Chocolate by Annette Curtis Klause. It is a young adult novel about a young girl~Vivian~who struggles to find her place in a world that doesn't accept her kind. It is a very mature read for a young adult novel but it deals with many problems teenagers struggle daily with, acceptance, identity, and a less than perfect family. So why is it banned in some places? Vivian's family are werewolves and the tough subject of teen sex is addressed. I loved this novel. Would I want my fourteen year old sister to read it? Maybe in a year. And I would discuss it with her after she read it. But I want her to have the option to read it should she choose to.

It is up to us as parents, sisters, brothers, and adults to moderate and discuss novels with the kids in our lives. It is not up to us to ban novels so they are unavailable to anyone. That is stealing a touch of someone's freedom and that isn't acceptable.
banned books good reads