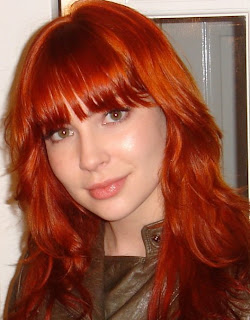 This month's featured debut author is Anastasia Hopcus. She has graciously taken time out of her busy schedule to stop by and tell us about about herself and her novel. Anastasia's debut novel Shadow Hills is now available! First a bit about this intriguing novel.

After her sister Athena's tragic death, it's obvious that grief-stricken Persephone "Phe" Archer no longer belongs in Los Angeles. Hoping to make sense of her sister's sudden demise and the cryptic dreams following it, Phe abandons her bubbly LA life to attend an uptight East Coast preparatory school in Shadow Hills, MA — a school which her sister mysteriously mentioned in her last diary entry before she died. 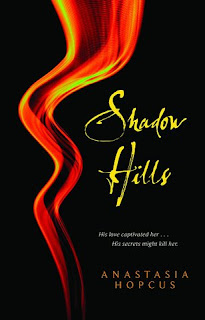 Once there, Phe quickly realizes that something is deeply amiss in her new town. Not only does Shadow Hills' history boast an unexplained epidemic that decimated hundreds of its citizens in the 1700s, but its modern townies also seem eerily psychic, with the bizarre ability to bend metal. Even Zach — the gorgeous stranger Phe meets and immediately begins to lust after — seems as if he is hiding something serious. Phe is determined to get to the bottom of it. The longer she stays there, the more she suspects that her sister's untimely death and her own destiny are intricately linked to those who reside in Shadow Hills.
Doesn't that just give you chills? Now to learn more about this intriguing author. Welcome to Heather's Odyssey, Anastasia! Thanks for stopping by and sharing the excitement of your debut book Shadow Hills with us.

From your bio on your website I see that you love horror movies and Joss Whedon. I've just got to say I love that about you! With such great work as Joss's feeding your muse I'm dying to know what inspired you to write Shadow Hills.

I’ve always loved paranormal stories, and I love the sense of menace and suspense that you get in horror films. Joss Whedon has a gift for mixing genres, and I really admire his ability to meld action, comedy, romance and horror into one compelling story. I wanted to have that array of different ingredients in my books because it keeps things from being static and predictable, and I definitely wanted it to center on the paranormal, since it allows for more exciting events. But I didn’t want to write about vampires or werewolves or slayers because, as much as I love Joss, I didn’t want my books to be just a pale imitation of Buffy. So one day when I saw a 60 Minutes segment about a gifted savant that really set me to thinking. What would it be like to be so gifted and what limitations might come with those abilities? What if there was a whole group of people who had strange abilities-what event might have set that off? And that's how my idea for the town of Shadow Hills started.

Having started to read Shadow Hills already, I've got to say, I think you definitely acheived an excellent blend of all things Joss. I love it! Off topic a bit. You worked as a receptionist in a dojo? Sweet! Is there anything you retained from that job to use in your novels?

I didn't take karate for very long. Although I loved the precision of the movements and the grace of the katas, I never could get past orange belt because I hated to spar. I just couldn’t bring myself to hit the other students, even in a non-aggressive way. But I do remember some of the terms and moves, so I think that helps a little in choreographing the fight scenes. One thing I really took away from that job was a new understanding of preteen and teen guys. While I knew what it was like to be a girl that age, it was the first time I really got to talk to guys about first girlfriends and issues with their parents. I talked a lot with one guy who had ADD and some impulse control issues, and I really started to empathize with him even though he was someone I would have probably considered a bully if I’d gone to school with him. I got to know several of the guys pretty well just talking with them as they waited for class to begin. I think that's one of the reasons I decided to try YA literature because I’d seen a new side of guys that age.

From your writing I can tell you have excellent insight into guys. Now I know why! Have you always known you'd write young adult novels or did it just kind of turn out that way?

No, in fact, I didn't even know I wanted to write books until about five years ago. When I was a teen, my ambition was to write screenplays. Then that changed to wanting to act. It was only after I decided that acting was not for me that I thought about writing books. First I tried an adult mystery, but after a while I figured out that YA was more my field. I love reading young adult and I really relate to teens-maybe because I don’t think I’ve gotten to a point where I’ve completely resolved the issues that came up during that stage of my life. It’s a really huge time of growth, and I’m still interested in exploring and understanding the changes we start going through then. Personally, they just started for me at that time; I certainly haven’t worked through it all yet.

I love the idea of writing for teens to explore such a time of huge growth. What was your favorite part of the writing process?

What I like best is creating characters. It's so much fun thinking of names and descriptions and backstories for all of them. I love to figure out what their personalities are and how they would talk and relate to each other.

Me too! Characters are the best. Can you tell us a bit about Shadow Hills that we may not know from the synopsis?

I think the synopsis doesn't reveal that Shadow Hills is also about the friendships that Phe forms at her new school. She makes friends with several very different, complex, and interesting people. I hope readers will really enjoy getting to know them as well as Phe and Zach.

I definitely have! By your writing I can tell how much you love the character building process. They really come alive. Are there plans for another novel in the works? A sequel or stand alone perhaps?

Both! I'd love to write a sequel to Shadow Hills. I have lots of other ideas in mind for the students at Devenish Prep. But I'm also interested in pursuing another idea. This one will be set in London in the early 1800's and will be a YA, too. Knowing myself and my interests, I’m sure it will also involve some paranormal elements.

That sounds awesome! I hope you end up doing both! Is there anything in the publishing process that surprised you?

I was surprised by how many people were interested in Shadow Hills because they liked the color of my hair. Who would have ever thought that my love for crazy hair colors would have been a marketing tool? *grin*

Too funny! But seriously, your hair color does rock. Any closing thoughts you'd like to leave us with?

I just want to thank all the bloggers and readers who have taken such an interest in Shadow Hills-they’ve exceeded my wildest expectations! Every single time someone tells me they liked Shadow Hills is just as wonderful and exciting as the first time I heard it!

How sweet, thank you for writing such an excellent book! Thanks again for taking time out of your schedule to join us its been a lot of fun. Now I'm off to finish reading Shadow Hills. Click on the title to order yourself a copy of this fantastic book!
2010 Debuts great reads