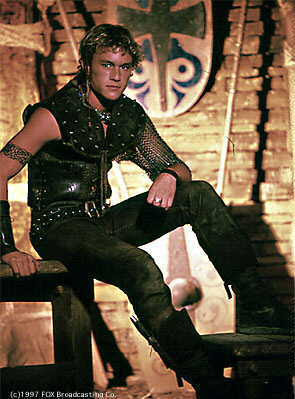 Things started to get really complicated for my main character last week when this lad showed up. Everything she thought she knew about her enemy is challenged and she has to face some pretty uncomfortable situations. For those of you who don't know this is a picture of the late Heath Ledger in his younger years when he starred in the television show Roar. The picture was so close to my secondary antagonist that it was eerie when I came across it. That's right, secondary antagonist. This is the first time I've wrote a novel with two. It's both challenging and a lot of fun. I've reached the 50,000 mark, whoo hoo!

Sadly I decided to set aside Voices of Dragons. It just wasn't pulling me in enough to stick with it. However, I will probably give it another try at a later time when my patience isn't so short. I hate giving up on reading a book. I've started reading Rampant by Diana Peterfreund, a novel about killer unicorns. Really. It has already pulled me in and caught my interest.

The song that I listened to again and again while writing last week's chapter was Fear Of The Dark by Iron maiden. It may seem like an odd choice but it was oh so fitting with what was going on in the chapter. What inspired you last week? Have you made any progress on your writing lately?
Heath Ledger inspiration Monday's Muse