Trailer Reveal for the Mindjack Trilogy

- January 10, 2013
The bestselling Mindjack Trilogy, from author Susan Kaye Quinn, now has a live-action trailer! With the help of over 20 cast and crew members, award-winning director Beth Spitalny brought the concept of Open Minds, the first book in the Mindjack Trilogy, to life on the screen. How cool is that?

To celebrate the launch of the trailer, Open Minds will be on sale for only $0.99 from January 10th (today!)-17th. You might remember me raving about it last year when I first read it. It was one of my favorite books of 2011 and with good reason, it was mind-blowing. Pun partially intended. Seriously though, it is dystopian to die for and should be on your must-read list if you haven't read it already. 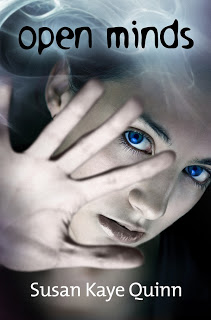 Here is a bit about it the first book, Open Minds:

When everyone reads minds, a secret is a dangerous thing to keep.

Sixteen-year-old Kira Moore is a zero, someone who can't read thoughts or be read by others. Zeros are outcasts who can't be trusted, leaving her no chance with Raf, a regular mindreader and the best friend she secretly loves. When she accidentally controls Raf's mind and nearly kills him, Kira tries to hide her frightening new ability from her family and an increasingly suspicious Raf. But lies tangle around her, and she's dragged deep into a hidden underworld of mindjackers, where having to mind control everyone she loves is just the beginning of the deadly choices before her.