- February 22, 2012
Today I'm celebrating the release of a dear friend's outstanding, illustrated middle grade novel, It's a little haywire by Elle Strauss. It was my distinct pleasure to design the cover for this novel, but I didn't do all the work. We tweaked and worked on it, but it was missing something. Then Elle had the idea to add a dog drawn by one of her kids to the cover. They drafted it up, sent it my way, I added it to the cover, and perfection! Now that's a special touch that most authors don't do. It made this one of my favorite covers that I've designed so far. Here is a bit about the novel: 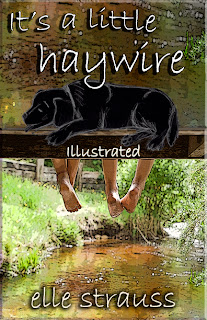 Owen True is eleven and eleven twelfths and has been “exiled” to the small crazy town of Hayward, WA, aka, Haywire, while his mother is on her honeymoon. All he has to whittle away the time is the company of Gramps, his black lab Daisy, and his Haywire friends, Mason and Mikala Sweet. They don’t look so hot this year, in fact, the whole town has gone to pot since the mill shut down.

Owen has his first encounter with a real life homeless man who ends up needing Owen’s help in more ways than one. But how does a rich city kid help the small town’s suffering citizens?

And what is Owen to make of the fog train and its scary, otherworldy occupants that appears out of thin air on the old tracks behind Gramps’ house? Do they have the answer Owen is looking for?

To read an excerpt, or to learn more about Elle and her work, check out her blog. It's a little haywire can be purchased here.