- March 20, 2012
I've decided to start a new feature on the blog called Great Reads. I love books and though I'm not a reviewer, I want to share some of my favs with you. So every now and then you'll see a Great Read feature here on my blog to spread the word about fantastic books. Have you heard about the haunting new novel by Michelle Muto called Don't Fear The Reaper? Oh my gosh, if you haven't, you've got to check it out. It's everything I love in a novel, dark, rich, and absolutely gripping. Michelle was kind enough to send the first chapter over for me to share with you peeps. Here is a bit about it first: 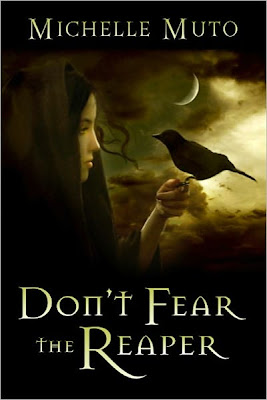 Grief-stricken by the murder of her twin, Keely Morrison is convinced suicide is her ticket to eternal peace and a chance to reunite with her sister. When Keely succeeds in taking her own life, she discovers death isn’t at all what she expected. Instead, she’s trapped in a netherworld on Earth and her only hope for reconnecting with her sister and navigating the afterlife is a bounty-hunting reaper and a sardonic, possibly unscrupulous, demon. But when the demon offers Keely her greatest temptation—revenge on her sister's murderer—she must uncover his motives and determine who she can trust. Because, as Keely soon learns, both reaper and demon are keeping secrets and she fears the worst is true—that her every decision will change how, and with whom, she spends eternity.

Where to buy/download sample chapters: