- May 03, 2012
Today I'm excited to be part of Cheri Lasota's blog hop for her fantastic YA novel, Artemis Rising which is now available in paperback! This story, set in the Azores Islands, weaves two different myths~one Greek, one Arthurian~into a love story set in the 1890s. Intrigued? Read on to learn more from Cheri about the exotic setting of the novel. 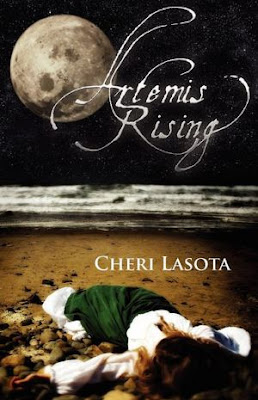 Cheri: Azores: The Jewel of the Oceano Atlântico

I am often asked why I chose to set my novel, Artemis Rising, in the Azores Islands. The answer is quite sim­ple: I used to live there. But that doesn’t really tell the story, does it? To truly describe the love I have for these islands, I have to go back to Minot Air Force Base, North Dakota in 1994. My fam­ily had lived there for four long, cold years, and ever since I was a wee tyke grow­ing up in Washington State, I had loved the ocean. I mean LOVED the ocean. Think of your most favorite thing or per­son in all the world. Can you pic­ture it? Okay, yes, this is exactly how I felt about the sea. Being land­locked for four years was a soul-​​crushing expe­ri­ence for me, so when my mother told me where we were to be sta­tioned next, you can believe my reac­tion. Though, I con­fess, I’d never heard of the Azores and had no idea where they were. But frankly, I didn’t care. That was just about the best news I’d ever had, um, EVER.

And it con­tin­ued to be, the more I learned about the Azores, the more I dis­cov­ered its peo­ple, its cul­ture, its beauty. Nothing in my pre­vi­ous expe­ri­ence had pre­pared me for the sight of the moon­rise heav­ing up from the sea in my back­yard, its light-​​stream burst­ing over the sur­face of the break­ing waves. I don’t even know if I do it jus­tice in the novel. But I sure tried. And that brings me to my real rea­son for set­ting my novel there. I wanted oth­ers to expe­ri­ence the love I have for these islands and this peo­ple. I wanted them to feel what I felt, to see what I saw.
The Arrival

I first arrived on Terceira Island (one of the largest of nine islands in the mid-Atlantic, about 800 miles off the coast of Portugal and 2000 miles from the U.S.) at 3 a.m. on a stormy night. I had no idea what to expect. We stayed in tem­po­rary hous­ing at Lajes Air Force Base that first night, and in the morn­ing, when I peeked out the win­dow to that round rim of blue ocean encom­pass­ing an island only 18 by 11 miles wide, the first thought I had was: “I’m going to miss this island when I leave.” You might find this reac­tion rather strange. I was sur­prised by it too. I’ve since learned that the Azoreans have a word for it. They call it saudade. It is one of the most dif­fi­cult words in the world to trans­late, but I can tell you this: I felt it deeply on that day. I can only describe it in my own words as a per­pet­ual and intense long­ing for some­thing you did not know existed. It is sad­ness and joy mixed into one. And it encap­su­lates every­thing I feel for the Azores Islands.

It wasn’t until I did leave the islands two years later that I real­ized I wanted to set my first novel there. I have always had a love for his­tor­i­cal nov­els and par­tic­u­larly nov­els set in the late 19th cen­tury. So when I was 22, I began a 5-​​year-​​long study of the Azores Islands, and out of this research came many of the ele­ments of my book: reli­gious fes­ti­vals, arena bull­fights, street bull­fights, and the towns and vil­lages I fre­quented when I lived there–Angra do Heroísmo, Praia da Vitória, Agualva, and Lajes.

These ele­ments are inter­wo­ven seam­lessly into the mytho­log­i­cal aspects I also use in the novel: the Greek myth of Alpheus and Arethusa and the Arthurian leg­end of Tristan and Isolde. In a way, writ­ing Artemis Rising was like piec­ing a puz­zle together. I knew in my heart that the pieces fit—I just had to fig­ure out the order.


You can order the paperback on Amazon.com, Buy.com, Book Depository, and Barnes & Noble.


To continue on the blog hop, please click here to jump over to  Jessie Harrell's blog.