The Púca Tour is Coming

- May 08, 2012
In a matter of mere days, the hardback and eBook of To Ride A Púca will be hitting the stores! *faints* I have a lot of fun planned for the blog tour and I'd love for all of you to be a part of it. There will be great prizes each week and contestants will get entry points for each blog that they comment on that week, and even more entries for those blogs they follow.

The tour will begin on May 21st and run through June 15th. My tour dates are full, but if you'd like to host me later, separate from the tour, I'd be happy to do that as well. Prizes will be awarded at the end of each week so those entering don't have to wait until the end of the tour. A new prize for each week will be given! Here is what will be up for grabs:

eBook of BECOME by Ali Cross
(OMG, you've GOT to read this. This book blew me away)

Sixteen-year old Desolation Black wants nothing more than to stay in Hell where it’s cold and lonely and totally predictable. Instead, she’s sent back to Earth where she must face the evil she despises and the good she always feared.

eBook of Running Wide Open by Lisa Nowak
(A fantastic read for all, but especially the guys in your life. Don't forget that Father's Day is coming up!)


Cody Everett has a temper as hot as the flashpoint of racing fuel, and it's landed him at his uncle's trailer, a last-chance home before military school. But how can he take the guy seriously when he calls himself Race, eats Twinkies for breakfast, and pals around with rednecks who drive in circles every Saturday night?

A personalized, signed paperback of the fantastic sea creature story, Tangled Tides by Karen Amanda Hooper. Move over Arial these mermaids rock! Easily one of the best books I've read this year.

Yara Jones doesn’t believe in sea monsters—until she becomes one.

When a hurricane hits her island home and she wakes up with fins, Yara finds herself tangled up in an underwater world of mysterious merfolk and secretive selkies.

A personalized, signed hardback of the mind-blowing Lacrimosa by Christine Fonseca. A fantastic book that will change the way you see angels and demons, and the sacrifices one makes for love.

Personalized, signed physical copies of my favorite historical fantasy novels, The Vespertine and The Springsweet by the amazing Saundra Mitchell. Mind-blowingly good. Seriously, she is one of my all-time favorite authors. And she was fabulous enough to agree to sign copies of both novels to the grand prize winner!

The Vespertine: It’s the summer of 1889, and Amelia van den Broek is new to Baltimore and eager to take in all the pleasures the city has to offer. But her gaiety is interrupted by disturbing, dreamlike visions she has only at sunset—visions that offer glimpses of the future.

The Springsweet: Heartbroken over the tragic death of her fiancé, seventeen-year-old Zora Stewart leaves Baltimore for the frontier town of West Glory, Oklahoma, to help her young widowed aunt keep her homestead going. There she discovers that she possesses the astonishing ability to sense water under the parched earth. 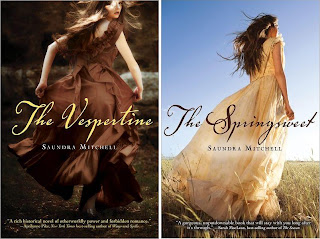 Entry forms will be posted on my sidebar for each giveaway the day before the week of that giveaway. You'll have many opportunities for points. I hope you'll join me in celebrating and pick up your copy of To Ride A Púca. Anyone who buys a copy and sends me a screen shot of their receipt will get 5 extra points in all the giveaways! 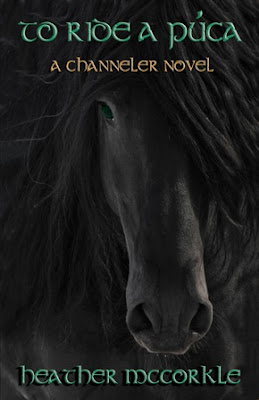